This has another Battle Creek connection.  Frank J. Kellogg was not related to either W.K. Kellogg (whose cereal used to be made in Battle Creek) or Dr. John Harvey Kellogg (whose 'biologic living' was ridiculed in the 2% accurate "Road to Wellville").  He sold a combination of laxatives and thyroid extracts by mail as a "obesity cure" and became one of Battle Creek's first millionaires - and was noteworthy for tying up the divorce courts so much that the Michigan Supreme Court annulled one of them, citing that the couple "deserved each other."

It took forever (it seemed) to track down a photograph of this Civil War supply sergeant-turned medical entrepreneur.  One emerged when this letter fell from the insides of a wall being torn out during a home remodel in Battle Creek.  It also gives an idea of how he did business AND how he was very, very proud of his signature.

The "Professor" is a title he bestowed upon himself. 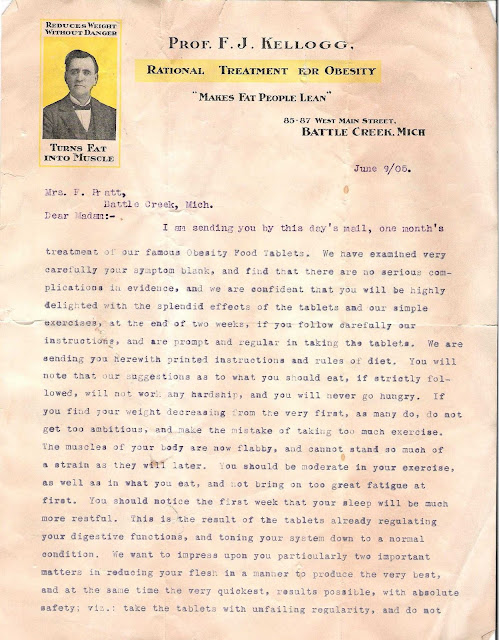 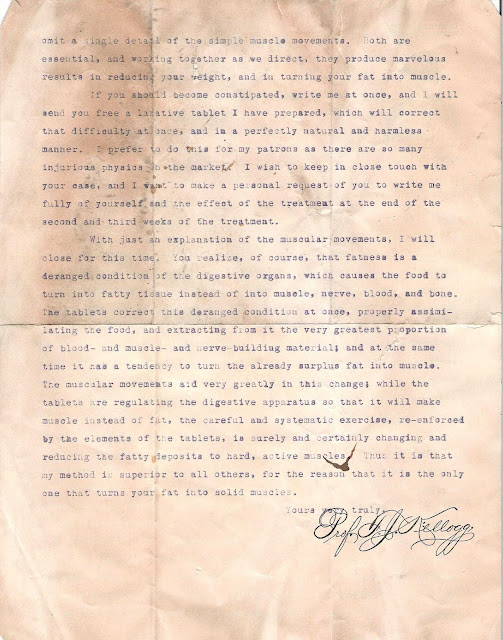 There's an article about his life and times, and multiple marriages, at this site:  The Kellogg Who Would Be King (shameless self-promotion alert - I wrote it!)
Posted by The Animating Apothecary - Perpetrated by Jim Middleton at 6:42 PM No comments: 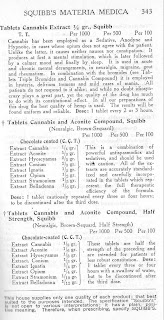 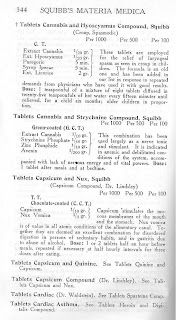 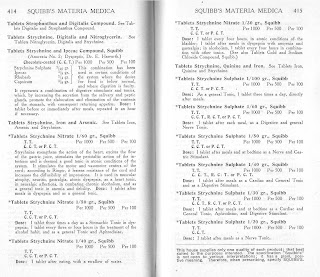 ...I am pretty certain that by 1919, these products required a prescription...
The text on cannabis reads:


"Cannabis has been employed as a Sedative, Anodyne and Hypnotic, in cases where opium does not agree with the patient. Unlike the latter, it causes neither nausea nor constipation. It produces at first a mental stimulation, which is later followed by a calmer mood and finally by sleep. It is used in acute and chronic mental derangements, in neuralgia, migraine, gout and rheumatism. In combination with the bromides (see Tab­lets Triple Bromides and Cannabis Compound) it is employed in hysteria, delirium tremens and mild cases of mania. All patients do not respond to it alike; and while no doubt idiosyn­crasy plays a great part, yet the quality of the drug has much to do with its constitutional effect. In all our preparations of this drug the best quality of hemp is used. "
Posted by The Animating Apothecary - Perpetrated by Jim Middleton at 3:32 PM No comments:

Here's a clip I found while converting files from *.flc format from my old Autodesk Animator Pro program, something that should have become Flash, but nooooooooooooooo that would have been too easy!
Posted by The Animating Apothecary - Perpetrated by Jim Middleton at 4:08 PM No comments:

A Moment of Snarkiness from the 2010 Edition...

﻿
Because sometimes you can smell people before you see them.....

Posted by The Animating Apothecary - Perpetrated by Jim Middleton at 7:31 PM No comments:

Images That Make a Collector Cringe

This came from a Popular Science issue in 1936.  With the Great Depression in full force, and radio being free, those clunky useless phonographs had to be put to some use.  After all, who'd pay money for music when you could get anything in the world for FREE on the radio? 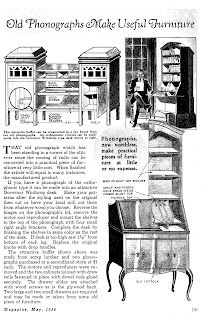 Now, let's jump to today and the news that electronic books are outselling paper-based books.
Sorry, gang, I'm not going to rely on perpetual easy-access to the internet or digital media.  The books are staying!
Posted by The Animating Apothecary - Perpetrated by Jim Middleton at 1:36 PM No comments:

In 1930, he wrote and illustrated (at least some of it, the graphics seem a bit variable) a guide to animation for Modern Illustrating, an artist correspondance course from Minnesota.  Here are the 17 pages he created: 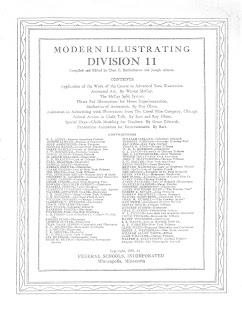 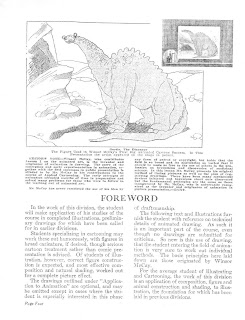 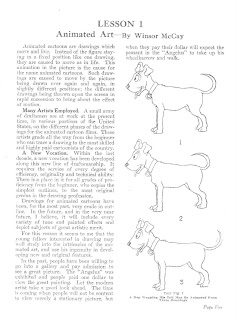 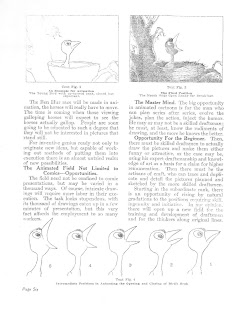 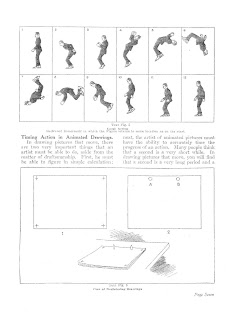 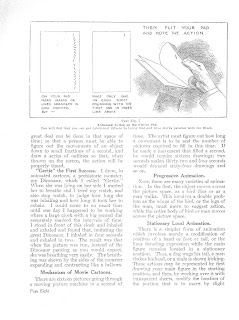 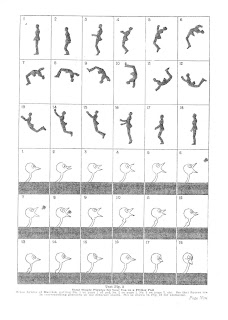 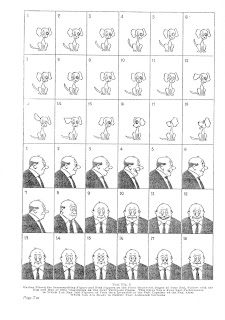 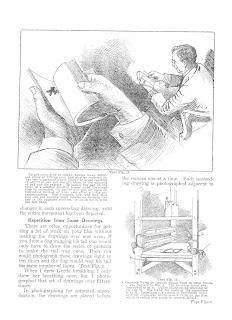 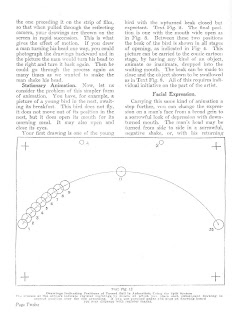 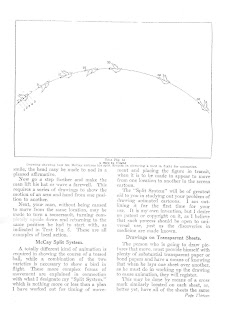 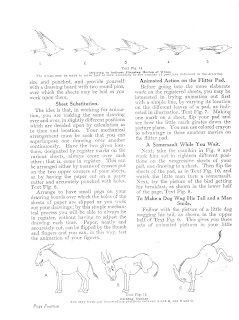 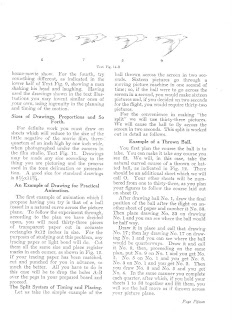 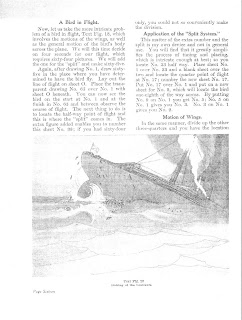 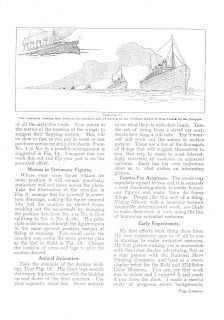 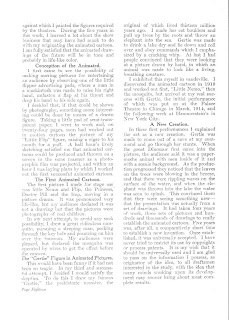 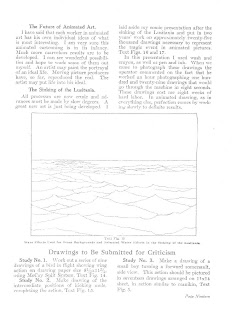 Posted by The Animating Apothecary - Perpetrated by Jim Middleton at 1:01 PM No comments:

From an email via CVM and Cindy Keefer:

We are sad to report that filmmaker/artist Jordan Belson died early
Tuesday morning, September 6, at his home in San Francisco, of heart
failure. He was 85. A memorial screening is planned for October 19 at
Pacific Film Archive, Berkeley. Other tribute screenings in several
other cities are being arranged, details will follow soon.

Born in Chicago in 1926, Belson studied painting at the California
School of Fine Art (now San Francisco Art Institute), and received his
B.A., Fine Arts (1946) from The University of California, Berkeley. He
saw films by Oskar Fischinger, Norman McLaren and Hans Richter at the
historic Art in Cinema screening series in San Francisco in the late
1940s. Belson was inspired to make films with scroll paintings and
traditional animation techniques, calling his first films "cinematic
paintings."

Belson produced an extraordinary body of over 30 abstract films,
sometimes called "cosmic cinema."  He produced ethereal special
effects for the film The Right Stuff (1983). His last completed film
was Epilogue (2005), commissioned by The Hirshhorn Museum. He is
survived by his long time partner, Catherine Heinrich.
(Revised bio by C. Keefer, originally for Guggenheim Museum's "The
Third Mind" catalog, 2008.)

More information about Belson and his work can be found on his
approved research pages, at
www.centerforvisualmusic.org/Belson

Earlier in 2011, Belson wrote a statement asking people not to put his
films online, as it did not do justice to his work.

In lieu of flowers, Belson's partner Ms. Heinrich requests that
donations be made to Center for Visual Music's preservation and
digitization work to continue preserving the legacy of Jordan Belson.
Contact cvmarchive (at) gmail.com (or paypal to cvmarchive (at)
gmail.com).

Here's a pilot that never got airborne, from 1993.  After about 5 months of meetings, a complete pharmacist recast, and three days of shooting video at pharmacies and laudromats that are no longer in business, I assembled this linear editing exercise with a pair of S-VHS players and lots of tachyarrhythmia.  And coffee...did I need to mention coffee?

Needless to say, the 10-episode series never went beyond these 6 minutes, and nobody gets to come around the pharmacy counter anymore without a supoena.  The "even longer for a clinical degree" - the PharmD - is now the only bona-fide entry card to "Behind the Counter" these days.

Snagged this to digital just before the original from 1993 began crumbling.  Lots of color shifts and sound drops..... egad....

Posted by The Animating Apothecary - Perpetrated by Jim Middleton at 4:38 PM No comments: