Essay: Cross-Influence in German Animation of the Silent Era

These notes represent some random comments based on a presentation at the Starved Rock Retreat in April, 2000

When exploring the evolution of Animation (with a capital A) as an Art, we need not look far into the development of the genre to fall upon some striking examples. The earliest extant specimens, by their basic nature, were replete with abstraction, and by the mid-1920s, the visuals had coalesced into a screen language that had a distinct Germanic flavor. It is understandable, therefore, that artists shared their enthusiasm and cross-pollinated each other's works. 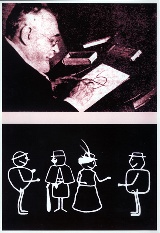 Ultimately, their influence made its way to America, where the styles were adapted to the tastes of  not only commercial animation, but narrative cinema as well. The simple line-drawings of Emile Cohl were a by-product of his Absurdist school of art from the 19th century.  Fantasmagorie (1906), his first film, blended one dreamlike image into another within its sixty-second screen time. His subsequent films were often stream-of-consciousness rambles that explored drug-induced fantasy (Le Reve d'un Garcon du café ) and odd character juxtapositions (Le Retapeur de cervelles).  Later, other French films, such as Anemic Cinema or Ballet Mechanique tossed in abstract visuals amid unrelated images (hats, bottles, pouting lips, fitful animations of Charlie Chaplin) in an attempt to explore visual technique at the expense of narrative continuity.

In the United States, early films by J. Stuart Blackton at Edison also toyed with abstract imagery, but only as a method of film illusion. Humorous Phases of Funny Faces (1907) has some blurred sketches that evolve into les visages grotesques, but that appeared to be less an attempt to create a visual language than to demonstrate a stop-motion trick. Edison wanted product, not art. Blackton provided the footage.

Back in France, Viking Eggeling died for the cause. His Diagonal Symphony was considered by many to be the "first" true abstraction in animation. He

spent three or four years on it and died less than three weeks after its first showing in 1925. Hans Richter, his assistant, quickly stepped in and put together Rhythm 21, which he claimed he made four years before Diagonal Symphony. His other contributions to abstract film also bear a distinct resemblance to Eggeling's work, perhaps influenced by his marriage to the earlier artist's widow. It is also interesting to note that Diagonal Symphony exists today only in fragments. Richter also claimed to have invented film trickery for his Ghosts Before Breakfast (1928), but these techniques had been in common use since the days of French magician-filmmaker Georges Melies. For all this squabbling, neither's filmwork can be considered the birth of abstraction. That honor should go to Walther Ruttmann.

Ruttmann created Opus I in 1922, with hand-colored images and a specially-composed score that was beautifully recreated at an Ottawa film festival in 1988 (and since has been released by Kino as a companion to Berlin, Symphony of a Great City). Ruttmann worked for UFA and stimulated the animation muse in several contemporaries, namely Oskar Fischinger and Lotte Reininger. He created the aforementioned documentary Berlin , and his influence can be seen in the special effects work on Fritz Lang's Metropolis. He saw sketches by Fischinger and encouraged him into film, bought a wax-slicing machine for effects that Fischinger developed, and inspired many of Fischinger's early techniques. He then coordinated the production of Lotte Reininger's Adventures of Prince Achmed (1926), brought in Fischinger's wax slicing machine for special effects, and the result was one of the first animated feature films, over a decade before Disney's Snow White.

With the coming of sound, Ruttmann chose to stay with narrative film, at one point helping edit
Olympia. However, Fischinger continued developing his abstract style and technique into the sound era, and most notably, into the Nazi era. Nazis hated abstract art. When Fischinger began winning awards, especially after his Italian premiere of Komposition im Blau (1935), he was encouraged to take his "degenerate art" to America (his brother, Hans, remained behind, and before being shipped to the Russian front, managed to complete the final abstract animated film in Germany in 1939).

While in America, Fischinger was teased for producing more children than films, but managed to create a handful of masterpieces: first, Allegretto for Paramount (who didn't know what to do with it), Optical Poem for MGM (who, when Fred Quimby was placed in charge of animation, also didn't know what to do with it), and the storyboard for the "Toccata and Fugue" sequence for Fanstasia at Disney (who didn't understand it). Allegretto and Optical Poem survive as testimony to his ability as both an abstract artist and an animator who knew how to make his work appeal to a general audience, even if his distributors were lost. It took the reissue of Fantasia in DVD "special edition" for Disney to fully acknowledge his contribution--they had gone from complete denial in the 1970s to an attempt at reconstructing Fischinger's vision for the DVD release, no doubt due to the diligence of John Canemaker (whose 1977 Camera Three retrospective on Fischinger had a profound influence on your humble typist's life).

As Fischinger's output waned in the 1950s, a seemingly unlikely resurgence in abstract animation appeared in the work of Alfred Hitchcock. His opening sequences, designed by Saul Bass, for Vertigo, North by Northwest , and Psycho all bore striking resemblances to films from Walther Ruttmann. The swirls of Vertigo recalled the silent-era studies by Fischinger. The linear work was reminiscent of the opening for Berlin.  And even the nightmare by Jimmy Stewart in Vertigo hearkened back to a similarly staged episode in Metropolis.

There is a possible explanation--during the 1920s, Hitchcock was employed at UFA, first as a title writer, then as an assistant director. He would have been there, learning the basics of his filmmaking craft, while the likes of Ruttmann, Fischinger, and Reininger were creating their own visual vocabulary. Hitchcock, ever the economist and possessed of a long memory, probably learned some of this vocabulary for his own, later use.