"War of the Worlds," 1938 Mercury Theatre production - clip from archive.org

Posted by The Animating Apothecary - Perpetrated by Jim Middleton at 5:10 PM No comments:

(c) 2021 Jim Middleton, Animating Apothecary
And after having some fun with PD material...

Falling for Spirals - More from the Never-ending Work in Progress

(c) 2021 Jim Middleton, The Animating Apothecary
And, after some twiddling...

Oh NO! I Read a Grown-Up Book! "A Swim in the Pond in the Rain" by George Saunders

Musings on A Swim in the Pond in the Rain by George Saunders.

First of all, this is an author worth following.  He does write the sort of sentence that compels you to read the next one.  That’s something I always liked about Kurt Vonnegut, whether or not he was a “junior” on the dust jacket.

Speaking of dust jackets, the book has the waxiest dust jacket I have ever felt.  Almost a dust magnet.  But then, most of the dust around here is my old skin, so I’d just consider that an act of repurposing.  Maybe the layer of my discarded DNA will someday clone me a new pancreas, or even a replacement for my ruptured ear drum (from a misadventure involving a horse I was feeding, nicknamed for my brother, in a barn remodeled to baby sit this lumpy equine, who thought he’d taste my right ear when I ran out of sugar cubes).

There - a digression already, just like Chekhov.  Or was it Turgenev?  Anyway, the analysis of Turgenev’s The Singers seemed to overlook the fact that the wretched, smelly little mudshack of a pub would aspire to call itself “The Cozy Corner.”  It jumped out at me, since little Edmore, now sporting its second “provisionary” will hold a grand opening for its satellite business on Monday - a neighboring deli to be called.... wait for it... “The Cozy Corner.”  I should stop in next week and ask if they’ve ever read this book.

The Darling seemed almost like a robotic, Heinlein-like character.  The context of the time makes me wonder if this was a completely new spin on a Victorian-era character; certainly, she seemed like the sort of a woman we’d meet in college seeking her “M-R-S degree,” in the unenlightened environment of the early 1970s - but in the waning days of the 19th century?

Gogol’s The Nose was something I read back in high school, and it was a good prep for Kafka, in a “oh, hell, let the guy spin a tale and see where it’ll go” sort of way.  Like Vonnegut, it seemed to give permission to just be flat out weird when the typewriter stared at you too long.  It also reminded me (now) of Terry Gilliam animation, which was still a couple of years in the future the first time I read it.  Saunder’s discussion made a casual mention of someone’s head falling into his soup as a random way to begin a tale, and that certainly grew in my subconscious to a fairly well-rounded dream that night: a Duke, at a royal dinner, looks down at his soup, and his head slides off his shoulders into the bowl.  The servants don’t approach him, because they are beneath his station, the chef wonders if the Duke liked his soup, and a dowager, his aunt sitting to his left, gently guides his hand to his sputtering head in the bowl so he may retrieve it, ultimately returning it to his shoulders, all drippy with soup.  “How nice of her,” remarks another dinner guest, “she has always been fond of the Duke,” and the dinner proceeds as if nothing had happened.  But then Sparrow began barking, and I had to wake for my own morning ritual of animal rodeo around the house.

I also thought it clever that Saunder’s “universal pronoun” was not he or him, but she or her.  That made me stop and think for a moment, since it was unusual in the context of my understanding of grammar until 15 June, 2021.

Chekov’s men in Gooseberries clean up for each other, but not for the housemaid, for whom they express delight at her beauty.  Nobody appears to flirt, or behave in manners that one would expect of the gentry toward a female worker - perhaps they were too old?  But then, Chekov died at 44, so what would he know of “too old”?   Did his medical background keep him impervious to a beautiful maid’s charms?  Was he projecting a cool professionalism to these older men, one of whom likes to go skinny dipping, in the pond, in the rain?

Chekov’s one-act comic plays (five of them are in a Dover collection) seem to predict Neil Simon’s humor of frustration emerging from annoying characters - and I suspect that cool professionalism of his found an outlet in having some of his patients appear as characters.  One had a single-minded middle aged lady constantly interrupting a bank official because she was sure he could get her husband’s job back at a military hospital.  It is a ten page exercise in frustration.

Another digression - my mind is full of them.  The other thing about Gooseberries is how stubborn the parsimonious brother is in eating his bitter gooseberries.  By gosh, he sacrificed everything so he could be a wealthy landowner and have gooseberries, so he was going to eat these nasty things and live a delusion that he made the right decision, even though he has to lie to himself to appreciate it.

I thought one word at the end of that story - Rosebud.

In the analysis of Alyosha the Pot, there was the statement about Tolstoy’s Resurrection that gave me a double take:   “The aspiration, then, is to never fail in love.”  I was so consumed with the split infinitive that I misread it first as, “The aspiration, then, is to never fall in love.”  And then I was thinking - when I read that Tolstoy novel years back (well, I should say, tried to read it - Russian names give me a headache, and referring to a spreadsheet didn’t help maintain any focus), did I misread a similar statement then as well?  And does that explain my entire life?  Or am I just in need of more coffee?    My takeaway from Alyosha the Pot is something I found typewritten by my great-grandfather’s cousin some 110 years ago.  Rufus Middleton wrote that if a worker is so good and quiet, “he eventually takes on the role of furniture.  And nobody misses a chair until he wants to sit down.”

Or as Saunders would say today, “...until she wants to sit down.”

Or as Washington Irving would say in The Legend of Sleepy Hollow:

“Ichabod had been carried off by the Galloping Hessian.  As he was a bachelor, and in nobody’s debt, nobody troubled his head any more about him; the school was removed to a different quarter of the hollow, and another pedagogue reigned in his stead.”

In any case, it was a fun read, and it succeeded in firing off some too-dormant neurons.

Posted by The Animating Apothecary - Perpetrated by Jim Middleton at 11:08 PM No comments: 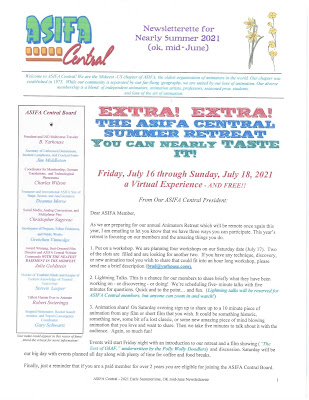 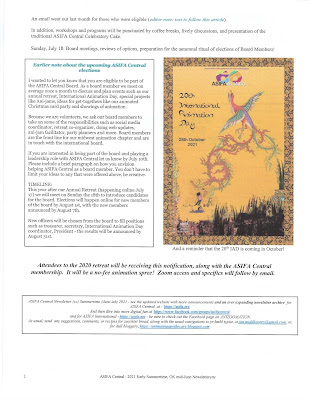 Posted by The Animating Apothecary - Perpetrated by Jim Middleton at 3:41 PM No comments:

A Unicorn Contemplates Cuddles - or Just Wants to Say Hi!

Posted by The Animating Apothecary - Perpetrated by Jim Middleton at 8:15 PM No comments:

A case study in Esperanto, so to speak -

Test with colors and minor edits:

Posted by The Animating Apothecary - Perpetrated by Jim Middleton at 9:36 PM No comments:

A sweet moment with a relaxed - and smiling - Buster Keaton as a San Diego bus driver - for those who have family or friends stuck in a rut:

Posted by The Animating Apothecary - Perpetrated by Jim Middleton at 5:12 PM No comments: