Wanda Mae Brooker, 84, of Battle Creek went to be with her Lord and Savior on Friday morning, May 25, 2012. She was born February 28, 1928 in Wabash, Indiana the daughter of Harlow F. and Hazel B. (Harden) Andridge. The family moved to Battle Creek in 1934 and Wanda graduated from Battle Creek Central High School with the Class of 1946.

Wanda faithfully worked at the Lakeview General Osteopathic Hospital from 1957 until its closure in 1985. She then worked as a receptionist at Lathrop Construction Company until she went to work for Rite Aid Drug Stores as a Pharmacy Technician in 1987 until she retired in 1999.

Wanda was a member of the Trinity United Methodist Church. She truly enjoyed camping, reading and loved spending time with her family.

A graveside service to celebrate Wanda’s life will be held 11:00 a.m., Tuesday, May 29, 2012 at Memorial Park Cemetery. In lieu of flowers, please consider making donations to the Humane Society of South Central Michigan. Arrangements were made by the Farley-Estes & Dowdle Funeral Home. Personal messages for the family may be placed at www.farleyestesdowdle.com
Posted by The Animating Apothecary - Perpetrated by Jim Middleton at 9:43 AM No comments:

A Rather Disturbing Trend in 'Medicine'

A recent link from "Physician's Money Digest" is as follows.   I find it at least disturbing that the article celebrates the profits that can be had in treating cancer, and how it can offer the information to physicians who might be willing to benefit from judicial investments.  I contend that a logical sequel to this would be a listing of the 10 Most Profitable Mortuary Chains.
Here's the article:

Right now oncology is the main attraction, which makes sense considering ASCO is just two weeks away. But oncology drugs have always garnered a lot of attention because the diseases they treat are so scary for the patients, plus they can be quite costly. (italics mine)

But the good thing (for the pharmaceutical companies) is that these drugs aren’t facing generic competition like some other drugs have to. As a result, expensive and older treatments are contending with low-cost generics for sales, meaning they’re still bringing in a pretty penny for the company. (emphasis mine - again, what are we celebrating here?  More effective treatments?  Or more expensive - and thus, profitable - treatments for drug companies?  And are any of these treatments more effective, or just more profitable?  And isn't it just about the creepiest thing to consider success not by outcomes, or benefits to the patients, but as profit from sales of these drugs.... what a world, what a world... )

FiercePharma released a list of the top 10 best-selling cancer drugs based on how much they brought in U.S. sales over the last year. (My interruption again:  they also have a nice discussion on whether drug company CEOs get paid enough!!! So far their newsletter is free, so go there and get the daily scoop on what PharmaLand is doing behind the curtain)....
(And look how the information is presented, like it's some Top Ten on the David Letterman Show)
10. Tarceva
Company: Genentech
2011 sales: $564.2 million
FDA approvals: Non-small cell lung cancer, 2004; pancreatic cancer, 2005; NSCLC maintenance therapy, 2010.

Ka- CHING!!!!!!
Posted by The Animating Apothecary - Perpetrated by Jim Middleton at 5:25 PM No comments:

Fallout from the Calendar archives...


Illustration compilation at lulu press.  Here's the link:  http://ar.gy/3UB9
Posted by The Animating Apothecary - Perpetrated by Jim Middleton at 9:06 AM No comments:

The Not Quite Wright House - Galesburg, Michigan

Southeast of Galesburg, Michigan, is a collection of five homes on a little side street called Hawthorne.  The Woods entryway is distinctive, and moreso when it is revealed that the little area was designed by Frank Lloyd Wright.  Four of the homes bear the direct Wright design - and one other, nudged off on a side spur, was by Taliesin Schoole fellow Francis Will Willsey.  Its 1442 square feet are up for grabs, and its asking price of $99K, amid the surrounding designs, seems like a bargain, but this is a case where possession could be 100% of the loss.
The poor place has been empty over three years, and even before that, the reclusive first-owner seemed to struggle with maintenance.  It's possible to see how things may have been, but the damage by neglect is substantial.
What was striking on just driving up to the property was the smell - a damp, moldy smell of an overmoist basement. 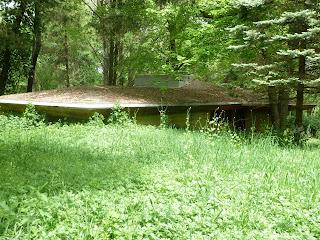 And once around the curve of the driveway, the open carport reveals plywood storage doors, their laminant warped... 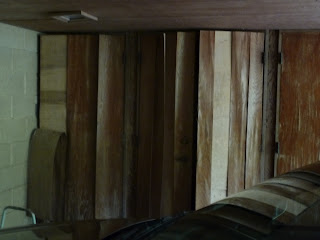 The entryway exhibits the Wright style of low ceilings that open into a 'great space' (here, the combined living and dining room), but the damage is there as well. 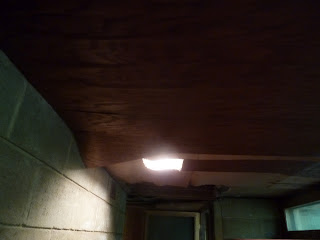 The main living area has been worked on to repair ceiling leaks, but any woodwork has fallen victim to the effects of moisture. 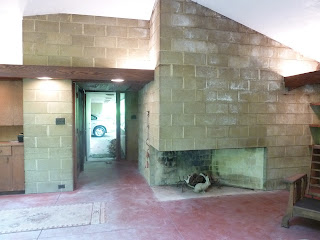 The vaulted ceiling continues to link this area to the kitchen, which has had some recent repairs and renovations - new appliances and countertops... 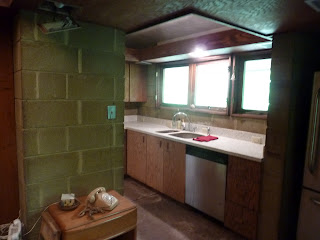 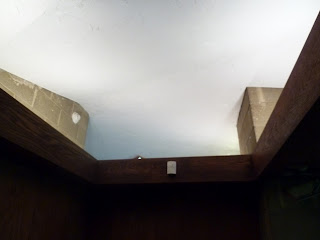 And off the living area is a long hallway, with a bathroom and two bedrooms on the right and a row of storage cabinets on the left.  All of the cabinet doors are damaged, one is missing.... 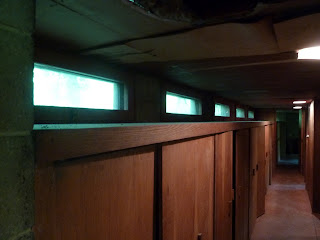 The unfinished cinderblock construction, even on the inside, almost gives the impression of being in a bunker.  The partially submerged design reinforces the feeling.  Nevertheless, it's in such a sweet natural location with serious history nearby that someone with the money for the home, and an additional $99K for renovations, would be in constant contact with mother nature. 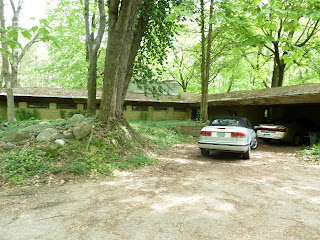 (Not much to do with animation, or apothecary even, but it was an interesting roadtrip this Sunday afternoon!)
Posted by The Animating Apothecary - Perpetrated by Jim Middleton at 11:12 PM No comments: