Ah, politics and the strangeness of bedfellows. Republican Theodore Roosevelt made a speech 100 years ago about the abuse of industry upon hourly workers (the memory of the Triangle shirt factory fire was still fresh at that time) - and how we needed *more* government to protect the workers from the "liberty" demanded by these companies. Here's a 90 second excerpt from the 78rpm recording in my archives. Film from the Library of Congress was used for the background. I love history.

Let's see how this holds for a blog posting:

Posted by The Animating Apothecary - Perpetrated by Jim Middleton at 9:18 PM No comments: 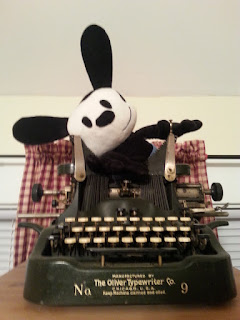 One of these days, I'll get a proper ribbon for this Oliver #9 and really figure out how to use that little golf-pencil underliner.  Oh analog experience, come forth!

Posted by The Animating Apothecary - Perpetrated by Jim Middleton at 5:40 PM No comments:


Jim woke at 23,000 feet to the conversation of the two businessmen sweating out the storm to his left, interrupting his recurring dream of three Mariachi singers with gold teeth and bad breath.
"...connect with our man in Houston and...just a minute, I think he's awake."

The two men reached for the nearest reading matter, one of them grabbing the complimentary travel magazine advertising bikini depilatories on the back, the other taking a keen interest in the instructions on the airsickness bag.  The plane made a sudden dip.  The instructions proved useful.

"Due to some unexpected turbulence, the captain has turned on the 'fasten seat belt' sign.  We will be coming by shortly with beverages that you may spill on yourself."  The attendant was speaking from the first class section.  Only her sneakers were visible beneath the drapery.
"Pay no attention to the man behind the curtain," Jim mumbled to himself.
The businessman reading the magazine peered over the top.  His partner momentarily paused in his search for a toothbrush.
"What did you say?"
"Excuse me?" said Jim.
"Just now. What did you say?"
"You mean, `pay no attention to the man behind the curtain?'"
The businessmen looked at each other nervously and turned back to Jim.
"I have no heart," said one.
"I have no brain," said the other.
"I see," said Jim.

"Comrade!"
"Brother!"
"You guys aren't Shriners, are you?" asked Jim.
The nearest one nudged Jim in the ribs and whispered conspiratorially, "I don't think we're in Kansas, anymore, you know."
"I think you've got me confused with your man in Houston."
He sat up.  "You're not our man in Houston?"
"I'm not even your man over Houston."

The two began a heated debate in a dialect that ran from Slavic to Pig Latin.  The one in need of a toothbrush lit a cigarette.  The attendant appeared.
"Excuse me, sir, FAA regulations prohibit smoking on this flight."
"Away with you, Capitalist love doll."
The attendant called out to Mannie, an organically grown Neanderthal who lumbered down the aisle, ate the lit cigarette and the remaining pack, and sat on the offender.
"Mannie will keep you company until we land.  Have a nice day."

At the gate in Houston, two hundred heavily armed FAA agents were waiting to escort the two men to a federally funded smoking rehabilitation center.  That they were carrying documents implicating US involvement in an international Tofu ring seemed unimportant to them.
Jim awaited the next leg of his journey to Mexico at gate 32.

(May 1988; tale left unfinished)
Posted by The Animating Apothecary - Perpetrated by Jim Middleton at 5:37 PM No comments: