And My Viewership is So Quirky!


Twice a month, there are mass visitations to this rather mundane, and generally unviewed, little blog of mine.  Each time, usually about the 5th or 20th of the month (this time the 24th), I get a sudden spike.

Blogger is nice enough to flag the points of origin, and it may come as no surprise that they have been - for the most part - from Mother Russia.

Lately, however, there has been a shift, as if the land of Vladdy Boy is attempting to obscure its inexplicable interest in these typings.

At first, it was obvious - Ukraine.  I suppose it's just to see if their absorbed servers there are working.

Then came, inexplicably - Brazil.  Now, I think Brazilians are monstrously cool, if only from my admiration of their gleeful attendance of Disney World in crisp uniforms and linear progression through the park.  I just wonder at their interest in a collection of doodles from a Michigan pharmacist.

And then, perhaps, not inexplicably -- unknown region.  Granted, until the US acknowledged China in the 1970s, it was considered a "big empty hole in the space," or some such phrase I vaguely recall from a period MAD issue.  Could that still be the attitude of Blogger?  Another quandary.

But tonight, 104 hits at 3am from, of all places, FRANCE! Now, I'm a bit of a francophile, I love me some croque monsieur whenever possible, but a trip to Montreal or Quebec is about as gallic an experience I've been able to muster since high school.  Edith Piaf and Maurice Chevalier rock my world, and I love mistranslating Jean Gabin into storyboards that'll never be produced due to copyright issues (I have learned from Nina Paley's encounters, so those guilty pleasures will remain for my eyes only).  But 104 folks simultaneously interested in me from France at 3am?  If I were in France at 3am, I wouldn't be interested in me, yet alone my blog!

Now, if Mother Russia is trying to boost my ego by artificially nudging my pandemic numbers, that's very flattering of her.  She already sends a surfeit of solemn bride material to my effectively  collapsed Instagram account, after all.  But my lovely wife is all the companionship I require, thank you, and if I need more hirsute experiences, I have an adoring dog who already lays claim to me as her human.  I admire your expanse of time zones, I respect your knowledge of transdermal chemical substances (at a safe distance), get a kick of of Shostakovich, and think vodka is the third best use of a potato, after French fries and potato chips.

Mother Russia - you're one clever mother!

Posted by The Animating Apothecary - Perpetrated by Jim Middleton at 8:50 PM No comments: 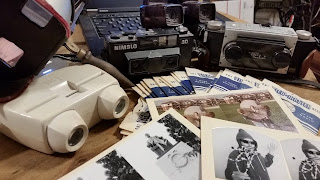 Posted by The Animating Apothecary - Perpetrated by Jim Middleton at 4:27 PM No comments:

A Bit of Background

Before the creation of the FDA in 1906, there were no restrictions placed on what could be sold as medicine in the United States.  Morphine was a common ingredient in infant teething formulas, asparagus extract was sold as a urinary “purifier,” and even Grape Nuts was touted by C. W. Post as a treatment for appendicitis.  Further, no drug company was required to state the ingredients of its products.  Overdosing and addiction were common in those “good old days.”.   Battle Creek, because of its reputation for health, drew the attention of several companies that set up shop, or at least rented a post office box, to benefit from the distinction of being in the same city as Dr. Kellogg’s Sanitarium.

Until 1919, Michigan pharmacists were only required to have a 10th grade education and have two years apprenticeship before taking a licensing exam.  Licensing of individual drugstores was not required until 1921.  Until that time, opening a pharmacy required little more than the willingness to do so.  It wasn’t until 1929 that even a two-year college level training was required (present training takes six years).

In the pre-FDA days, Battle Creek boasted over a dozen pharmacies, most of them concentrated around the center of town.  Many of them dispensed their prescriptions in elaborate monogrammed bottles, stoppered with the finest Portuguese cork, and sealed with paraffin.  The requirements for labeled ingredients imposed upon the patent medicines didn’t apply to compounded prescriptions; in fact, until as late as the mid-1960s it was still considered by many as a violation of the physician-pharmacist working relationship for a pharmacist to discuss medicine with the patient.

As chain pharmacies emerged, gaining strength with preferential pricing and agreements with insurance and drug companies, independent pharmacies found it increasingly difficult to remain competitive and still be profitable.  As a result, the baker’s dozen of independent pharmacies that existed in 1978 has dwindled to two in 2001.  Their legacy of treating the ill and serving their community will remain in our community’s collective memory.


Some Random Notes on the Collection at the Kimball House Museum in Battle Creek, Michigan:
(note - this is far from a complete listing of Battle Creek pharmacies - this brochure was developed as a guide to selected artifacts at the museum put on brief display in 2001.  The legends surrounding Speaker's pharmacy could fill a book on its own.)

Log Cabin Sarsaparilla, of Rochester NY– sarsaparilla was a general tonic and “cure all” for digestive disorders; simple to make, it often contained high levels of alcohol to “enhance” its absorption and “preserve the ingredients.”  Dr. Guysott added yellow dock (then popular for jaundice or constipaton) to his preparation.

The “bitters” from Dr. Sawen’s and  Dr. Hostetter’s subscribed to the philosophy that medicine had to taste bad to be good.  It didn’t hurt that the compounds were usually 50 proof.  Dr. Hostetter made use of an annual almanac to promote his product. 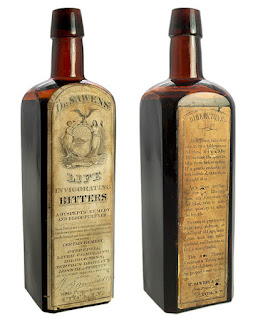 Pine Tree Tar Cordial, again replete with a hefty dose of inebriants, would give the proper impression that the patient was drinking turpentine.

Lydia Pinkham’s Vegetable Compound was the grandmother of all patent medicines; her picture was common to nearly every typesetter’s box.  Her written advice to customers, however, was completely posthumous.  The product is still made today, although the “preservative” is at a lower concentration.

Buffalo Lithia water came from rich mineral springs during an era where drinking such water was an important part of taking “the cure.”  Contemporaries noted the best way to indulge was to “hold your nose and drink quickly.”

Vin Antimony, presented here in a pharmacy’s reagent bottle, was primarily put to use as a cathartic and emetic...for those with the “urge to purge.”  Also known as the “tartar emetic.”

The Old Indian Medicine Company, makers of Wa-Hoo Bitters, probably had nothing more than a post office box in Battle Creek.  It offered local residents the opportunity to try its concoction at a substantial discount.

Claude C. Jones ran a pharmacy in the old Bijou theatre arcade at 47 West Main (now Michigan) after trying out a location at 115 Calhoun.  When the Battle Creek Retail Druggists’ Association organized in 1928, he was its first president.

M. L. Pierce Palace Pharmacy was a new addition to 53 West Main by 1889.  Short-lived by comparison to most, his store didn’t survive to the turn of the century.  A similar fate met J. F. Halliday and Sons.

The Health Home Pharmacy was a fixture at 222 West Main for the last two decades of the 19th century.

Willard Drugs of 45 East Main remained in business until around World War I.

Larmour’s Drugs, founded by A. Fred Larmour, originated at 201 South Kendall before moving to Urbandale in the 1930s.  It remained the longest operating independent pharmacy in Battle Creek.

The Holton Brothers were doing business at 3 West Main in 1869.  A move to 19 East Main (the “Peninsular block”) came four years later.  They became Willard Drugs after moving to 45 East Main.

R. W. Snyder had no local pharmacy, but prepared medical supplies (“Spirits of Camphor”) and through its successor, the Alden Brothers, produced “Orange Cider” and “Wild Cherry Phosphate.”  The labels are suitable for framing.

The Battle Creek Sanitarium Pharmacy was discreetly secreted into the depths of the San’s basement, emphasizing Dr. Kellogg’s philosophy that drugs were unnecessary in the world of “biologic living.”  One San pharmacist, Oscar Speaker, left in 1926 to begin a retail pharmacy at 22 East Main, a site that probably employed every pharmacist in the county at one time or another before it closed in the 1970s.

2001 research for this project by Jim Middleton, one of the few pharmacists in Battle Creek who didn’t work at Speaker’s Drug Store....but nearly everyplace else that no longer exists.
Posted by The Animating Apothecary - Perpetrated by Jim Middleton at 7:54 PM 1 comment: