I was seven when the circus first came to town. It was a muggy morning in July, when ideas hung like Spanish moss.
I saw Tony as just another new kid in town, sketching caricatures of the passing parade. He fell behind when the team elephants were spooked by a firecracker and upended the lion cage, and several of his sketches flew into the wet breeze.
I gathered up a handful as he ran ahead, trying to see what was happening while avoiding the freed lions. A mighty pachyderm, Elsie, calmed one of the lions by pressing it up against the exterior wall of the local Vauxhall dealership until it blacked out, and Tony turned just in time to see and sketch it. I caught up with him with his slightly soggy renderings, and we both ran to the fairgrounds at the northeast edge of town.
We hurried our introductions and snuck into the clown car, thinking we could get in the show for free. But when the clowns all piled in, we were squeezed further back than expected, close to a trap door – and when they emerged in the Big Top, Tony was gone.
I found his sketch with Elsie and the lion, but never saw him again.
I stuck with the circus, and was with Elsie until she passed away, proud and happily pampered, nine years ago.
I’m glad Tony made a career of art, because his drawing showed so much promise. 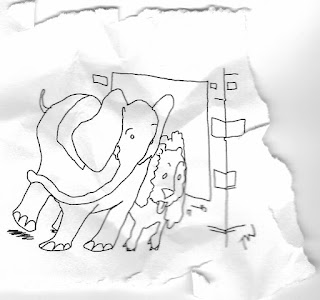 Posted by The Animating Apothecary - Perpetrated by Jim Middleton at 8:58 AM No comments:

A Few Quiet Minutes with the Family

Posted by The Animating Apothecary - Perpetrated by Jim Middleton at 9:19 PM No comments:

A Kick in the CoVid

Posted by The Animating Apothecary - Perpetrated by Jim Middleton at 8:04 PM No comments:

Part of a larger group anijam - adjustments here for colors and staging....
Posted by The Animating Apothecary - Perpetrated by Jim Middleton at 8:03 PM No comments:

Need to slow down the action a bit, but the basic idea is taking shape.  Whatever that idea might be...

Posted by The Animating Apothecary - Perpetrated by Jim Middleton at 9:12 AM No comments: 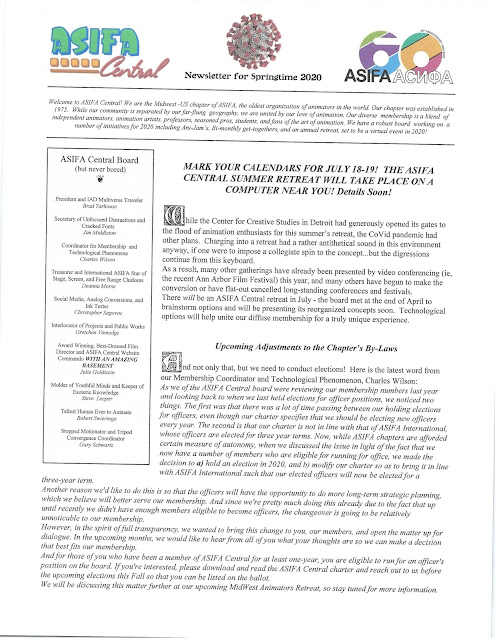 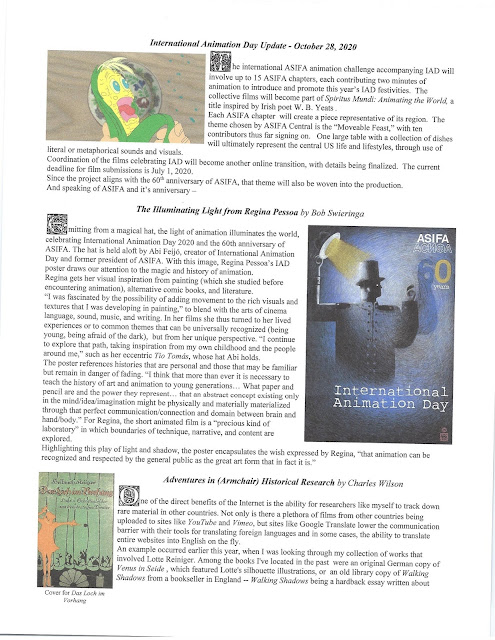 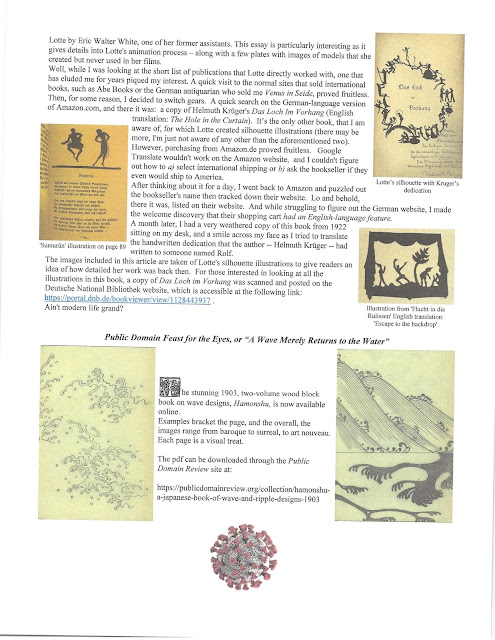 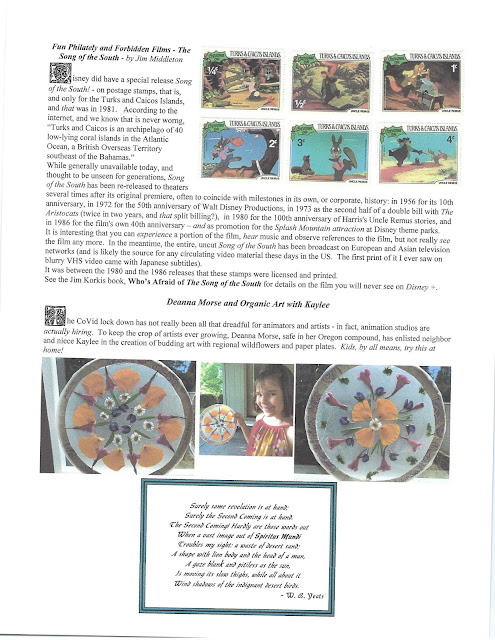 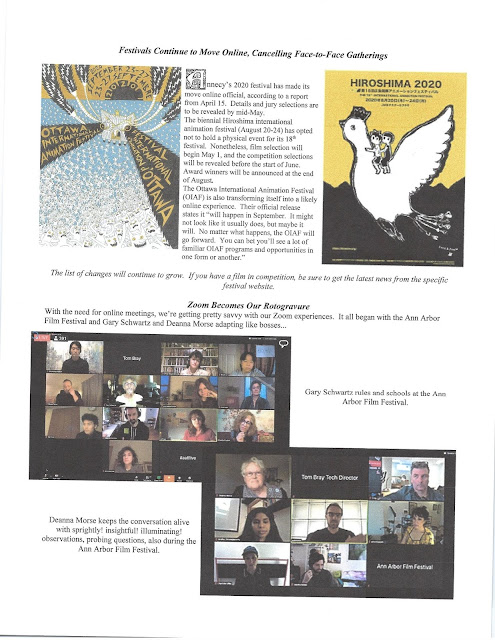 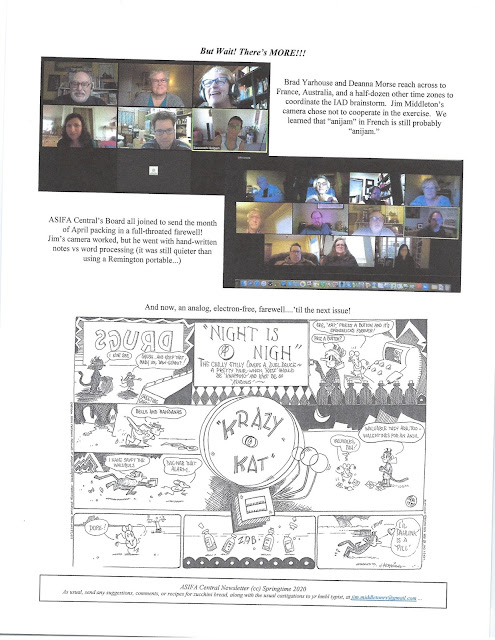 Posted by The Animating Apothecary - Perpetrated by Jim Middleton at 5:14 PM No comments: 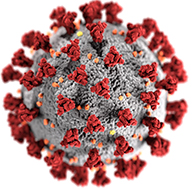 Testing, testing, testing - all this talk about testing, especially near the end of a challenging academic year. Everyone getting all nice and springful of testiness.
Well, Monday, I did get tested. Yes, the elusive CoVid test.
Not of symptomatic necessity, but because of surgical protection for the folks at a Kalamazoo hospital. And it wasn't in the driver's seat of the SUV, either -- it was within the mildly panicked confines of the outpatient surgical floor in the hospital, upright in a Stryker bed, and in my freshly washed surgical gown and a fresh non-surgical mask of our own provision.
The young nurse appeared in full battle regalia for the event, face guard, masks, double layered disposable gowns in place. I felt fairly underdressed for the occasion.
She adjusted my bed to put me at about a 45 degree angle, instructed me to tilt my head back to make an approximate 70 degree level of flexation, and then said "Sit on your hands, please: This is going to be very uncomfortable, and I can’t have you make a grab for the probe."
I closed my eyes, and the long-stick cotton swab began its journey into my right nostril. She explained as she proceeded with the probe that swab had to reach the back of my throat via this right nostril route. I somehow was able to hear her actually say that.
It burned, all right, and my right eye began to tear up, and after a few seconds, we agreed that she had probably reached her intended destination. She then apologized, saying she had to hold it in place for 10 seconds to obtain a proper sample.
The burning continued, and she swept the stick back out before I could be immediately aware of its exit.
My right eye continued its lacrimal drainage down my cheek, and there was a wee bit of blood coming from the right nostril by the time it was all over. The remaining time before the completion of the pre-op process was spent holding (and moistening) severeal tissues against nose (and I do mean severeal...that situation called for a new word).
I discuss this at length, not to profess any bravery or extreme fortitude - there are many far more uncomfortable medical procedures one in his third act gets to experience - but because I hear how certain people say they're getting tested “all the time," yet don't seem to be appearing in public with any of the physical consequences - it is unlikely one could go through this on a routine basis and still have, say, makeup intact, or at least unreddened eyes.
Fortunately it came back within the hour as "negative."
That meant the next phase of the adventure could begin. Lucky me.
Posted by The Animating Apothecary - Perpetrated by Jim Middleton at 4:24 PM No comments: