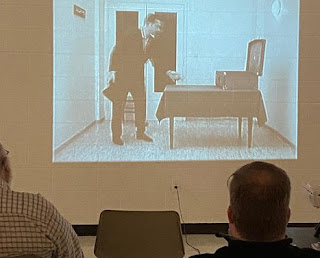 More of that frisky feline! 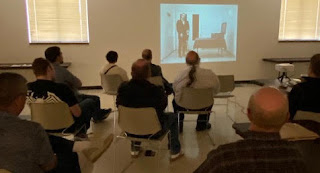 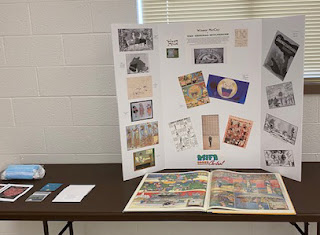 And only a mile away from his father's final resting place: 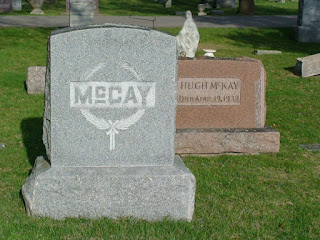 Lesson learned from the venue - get a better projection screen!

Posted by The Animating Apothecary - Perpetrated by Jim Middleton at 12:51 PM No comments:

GIFs tell the story, or at least, fit on the blog template!

And another version, with music! 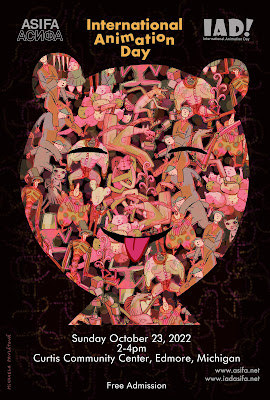 Each year in October, the international association of animators known as ASIFA celebrates the anniversary of the first theatrical exhibition of projected animation.
That first theatrical exhibition occurred nine years before Walt Disney was born.
ASIFA’s International Animation Day (IAD), commemorates that primal evening in Emile Reynaud's Parisian Theatre Optique in October of 1892.  This is ASIFA’s 21st celebration, returning to face-to-face gatherings after two years of on-line conferences.  International events and showings are being planned throughout the month of October.
Reynaud’s projector was his unique invention, combining mirrors, magic lanterns, and a pair of film reels cranked back and forth like a modern nightclub DJ.   His hundreds of hand-inked drawings on a perforated film strip presented tales of a clown and his dogs, “Poor Pierrot,” and a really good beer.
When the Lumiere brothers began their 35mm filmed “realities” a few years later, Reynaud abandoned his work, saddened audiences were more thrilled by oncoming trains than by his animated stories.
Animation as entertainment re-emerged as early filmmakers deconstructed the primitive projections in the early 1900s, and that caught the eye of Michigan native Winsor McCay, who had grown up in Spring Lake and Stanton, setting a restless pen to paper and becoming a published illustrator by age 11.
His father, working as a real estate agent in Edmore, sent his restless son from their Stanton farm to Ypsilanti to learn business, but young McCay took a single class on perspective instead and ultimately began a breathtaking series of fantasy comic pages for Hearst in New York.  During his lightning sketch performances in vaudeville, he witnessed early experiments from the Edison and Gaumont studios and decided to breathe life into his “Little Nemo,” show “How a Mosquito Operates,” and create an early masterpiece of interactive theater, “Gertie the Dinosaur.”  By 1914, he had crafted work at a level that emerging studios would not approach for nearly a generation.
The commercialization of his art, restrictions from Hearst, and the advent of sound have, sadly, made McCay relatively unknown today.  After McCay died in 1934, Disney took McCay’s son, the model for “Nemo,” on a tour through his new California studio.  “This,” said Disney, “should have all been your father’s.”
McCay’s father and other family members are buried in Edmore, surveying the traffic along Wyman road.
“What better place than Edmore to celebrate animation and McCay,” notes ASIFA chapter secretary Jim Middleton, also an area coordinator for international animation day.  “He remains an inspiration to this day for many aspiring animators.”  An overview of Winsor McCay’s work will be among the presentations for international animation day, and many examples of his comic art will be on display in an upcoming event in Edmore, Michigan.  The animation day celebration films will include student works from around the state, independent productions from ASIFA members, and animation examples from Australia, across Europe, China, and the middle east.
The free event will be held at the Curtis Community Building in Edmore, just off M-46, from 2-4pm on Sunday, October 23.

Posted by The Animating Apothecary - Perpetrated by Jim Middleton at 6:04 PM No comments: