A "Gertie the Dinosaur" Mystery from 1914

The early masterpiece by Winsor McCay, "Gertie the Dinosaur" (1914), was a quarter century ahead of its time for character animation.  Recently, an auction catalog of animation cels and artifacts produced a pair of original rice-paper drawings from the film.  One of them caught my eye, since it was an unfamiliar pose, not seen in the prints known to circulate: 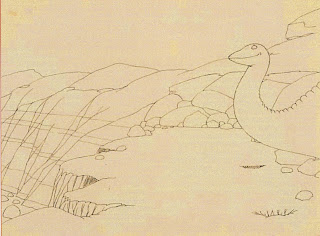 It would have been at the end of the film, past the point when she drank the lake dry.  Could the original stage release of "Gertie" have included a final curtain call for the frisky dinosaur?  An animation mystery!

The closing minute of the film is attached below for comparison - it'll be a bit compressed for this webpage, but the entire version is on line in several formats from several sources.


The auction catalog will probably not have a permanent web presence, but here's a link to it, as of April 2018:


POSTSCRIPT: The auction house doesn't mention how much the two Gertie drawings realized.  They were listed with $4500-$6000 range.  Either the amount was considered "anonymous" or was not to the minimum expected, so --- they may still be out there looking for a new home.  Will keep the eyebones peeled!  Who needs to retire, right?
Posted by The Animating Apothecary at 8:54 PM