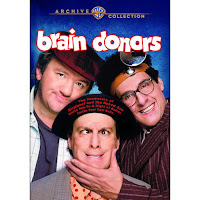 After hearing it discussed on the Marx Brother's Council Podcast, I found a copy of the Zucker Brother's Brain Donors from 1992. It follows the plotline from the Marx Brothers' MGM film Night at the Opera from 1935, with pacing by comedian Dennis Dugan to match their later, more frantic Paramount releases. There is even credit to the original Kaufman-Ryskind screenplay at the closing credits.

John Turturro was starting his ascendency, Mel Smith was an established comedic character, and Bob Nelson seems never to have made a film after this one (and that's a pity; he's great here and in an earlier appearance in Schwarzenegger's Kindergarten Cop ).
Opening and closing animation by Will Vinton ("California Raisins") and music by Mark Motherspaugh.
Apparently, Paramount in the 1990s was undergoing a comedy excision in its management and another film with the same team was mothballed (another pity). 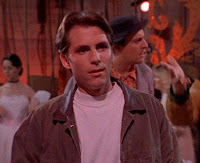 It's fun and fast (75 minutes!?), and those familiar with the original Marx film will see how it takes some familiar situations and gives them a unique twist (the contract scene, stateroom scene, piece where the manager is greeted by stagehands).
Screenwriter Pat Proft certainly appreciated his source material! (the title, a Paramount decision, didn't make the appropriate connection, however...)
And to top it all off, the love interest for the film is played by Spike Alexander, a near doppelganger for Zeppo!
It's episode 31 of the Marx Brothers Council Podcast series, available at their website:
https://www.marxbrotherscouncilpodcast.com/
Posted by The Animating Apothecary at 5:42 PM