The Poster Challenge:
First of all, to have a poster challenge, you need a poster: 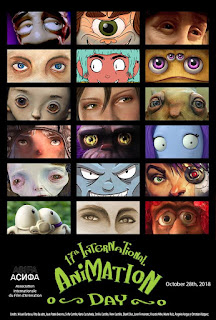 Then take an asisgnment:
The task is to morph between two sets of eyes for this year's poster.  Set #17 goes to #1.
The tests are ....

#1 - 11 drawings to check for color balance and registration, run through Sony Vegas, looped front to back, shot on twos.

And an animated gif test on the first frame for background layering...

And, blending the first second or so...

And now with the final frames, for the background...

Unassembled frames, waiting for layering and final edit to a 3 second opus:

The eyes have it - 18 visions gaze upon the viewer, just as the viewer is drawn to the variety of imagined expressions they represent.  Rene Castillo of ASIFA Mexico, along with nine other animators at his Mandaraka studios, created these emotions, frozen in time, practically begging for life beyond their storyboarded existence.
Castillo noted that “every animator has a unique and personal point of view, with different styles, techniques, themes, colors... if we celebrate world animation, we must celebrate the diversity of looks.”
With this philosophy, he created his poster celebrating International Animation Day, expressing passion he has embraced since a serious auto accident gave him appreciation for the brevity of life.  Better to mold life into clay than a life of molded management.
ASIFA Central in the United States took Castillo’s vision one step further, molding each image into an animated continuum.  Their Anijam project will be completed in time to present at its August retreat in Grand Rapids.

...and the whole thing, assembled by the MASTER, R. Brad Yarhouse:

Posted by The Animating Apothecary at 10:34 PM