Waiting at the Church - a video for a 1906 Edison Cylinder - Now! With ADDED WORKFLOW NOTES!

THE TEDIOUS PROCESS EXPLAINED
- after a half-dozen updates -
(you'll probably get sick of "Waiting at the Church" by the time you're done here, too)

This was going to be a "quick project" involving a series of 3x5 cards with the lyrics broken down line by line, then flipped and photographed in real-time while the song played.
Of course, they didn't flip properly.
Of course, they all stuck together when trying to pull the cards along, one after another.
SO
The 3x5 cards, which somehow ended up being 655 x 480 pixels, were photographed and placed into the Sony Vegas 15 system, stretched to match the specific lines in the song.
Those results were unsatisfactory.

SO
The cards were processed out as a series of jpgs, again ending up at 655 x 480 pixels, and re-introduced into the Flash CS5 environment, aligned with the 1906 soundtrack, "broken apart" within the Flash software to adjust them to the workspace as a "sing along," and then tied in with a series of b/w public-domain gifs and jpgs (from a low-res 36,000 item library, but considered all "hoo ha!" in 1996), which were then "colorized" with a layer in Flash (colors at a 50% alpha level).
AND
Once things were ok in the Flash environment at 24fps, the entire 2900 frames were exported as jpgs again, reintroduced to Sony Vegas again (with 0.04 seconds per frame equating to 24fps in the edit preferences for imported material).  The soundtrack was slid into place, image and sound worked well, and then back to exporting everything in a 640 x 480 size.  This explains some of the cropping at the beginning title.
This took a day.
The soundtrack had already been "produced" from the archival cylinder collection here, with some surface noise and amplification adjustments made to the original (and just a touch of echo), along with stretching it to 2 minutes from the original recording speed of 1 minute, 50 seconds (I compared my original transfer with that from the UCSB cylinder archive, which ran exactly 2 minutes, but was very noisy and obviously frequently played, before making the adjustment in Audacity for the speed).

Once having sent that to a local showing with a deadline of June 3, I returned to the original piece again and spent a couple of hours building a "bouncing ball" heart layer to the process.  It still required exporting the Flash frames as jpgs, but it was streamlined by using "motion tweening" to move the ball from one image layer to the next.  Overall, it was beneficial in creating a smoother transition between frames.  The heart was made as a "graphic symbol" and keyframing was applied with an F6 function to the entire layer of frames with the heart.
It took about two hours to create the layer, move the heart around, use it as a bridge for the final appearance of the unfortunate letter, and then render the frames out from Flash, in to Sony  Vegas, and then out again with the same 640 x 480 size.

Here's the version WITH a bouncing ball!  Everybody SING!!!!
2020 Animating Apothecary

It was ok, but the resolution was pretty poor for anything other than internet use.
SO
Searching through the Battle Creek historic image archives, I came upon a low resolution of the Garden Theatre interior from 1910.
I rather like the vaulted ceiling: 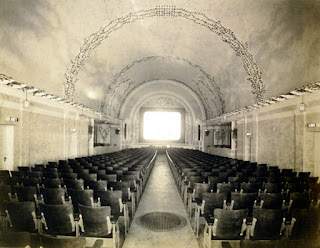 It needed to be boosted to a 1920 x 1080 size, but that increased the jagginess of the image, along with making the color of the theatre interior challenging for use as a matte-like overlay image for the two-minute piece.
SO
Back to Photoshop, making a 1920 x 1080 size, turn it to black and white, then using a blur-iris function to smear the image, and then export it again, thusly: 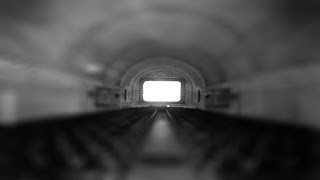 Brought everything back into Sony Vegas, gave the theatre interior its own layer, used their chroma-key function to make the enhanced white screen more transparent, and then ran the animation beneath it.
Also, at this time, I decided to assign it a "Sfumato" number of 1.75, since this whole project was something outlined back in 2002, at which point Sfumato #1 had already been completed (1999), Sfumato #2 was "a work in progress" (still is), and Sfumato #1.5 (Avian Flu) had appeared in its first form in 2006.
Obviously, I let other things get in the way over the years....
Finally, I came across a 16mm projector sound effect for the first few seconds, and here is a version of that completed edit, at a resolution that Blogger can tolerate, for review:
2020 Animating Apothecary

Posted by The Animating Apothecary at 9:08 PM