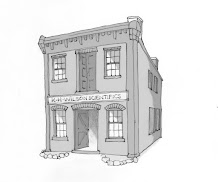 Kay and Howard Wilson's Lab, modeled after the first Eli Lilly factory of the 19th century.
They developed a rapid and inexpensive assay to identify adulterated ethanol, making them very wealthy during the roaring 20s.

The building was donated to the university on their death and demolished in the 1980s for a stadium parking lot.

In the course of demolition, it was discovered that the walls contained about $150,000 in 1920's-era "horseblanket" $50 bills, which scattered around the site, to the dismay of the university trustees and delight of students attending the event.

Only a small fraction of the money could be recovered by the university.

Posted by The Animating Apothecary at 11:45 AM

Email ThisBlogThis!Share to TwitterShare to FacebookShare to Pinterest
Labels: wilsons of lincoln boulevard