"Did you read where two engines crashed in Pennsylvania?"
"Only in America."
"I heard it also happened in Mexico City."
"Only in North America, then."
"And in Germany."
Dolor paused for a moment.  "Oh bless your heart! " he spat, and slammed the  door. 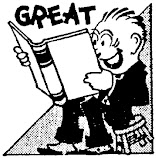 "That was at about eight o’clock this morning, officer.  He didn't say another  thing to me all day."
The officer rolled a cigar butt between his toes.  "Then you did see him before the murder."
"No, but when I didn't see him, I knew he wouldn't talk to me."  I thought about that for a moment.  "We weren't very close," I added.

Dolor lay on the floor between us, the deep, tiny hole in his  chest filled with blood.  How clever, I thought.
"What?"
"I was thinking to myself."
"Sorry. Didn't mean to interrupt."  The officer returned to his  report.

Dolor was a real oxnard.  A damned fine accountant, but an oxnard.  Always wore white shoes and brown socks.  Always had warm milk for  lunch.  Would go out of his way to see a Tammy movie.  A real oxnard.
"How was he killed?"
"Looks like someone ran a Bic fine-point through him,"  the officer said.
I noted that the officer was using the murder weapon to fill out  his report.  Such hollow mockery, I thought.
"How do you spell 'mockery?'" he asked.
"With the 'w' silent, as in 'elk.'"  I thought about that for a  moment.  "We weren't very close,"  I added.

The officer was stiff, yet courteous; efficient, yet smelly.  After taking Dolor's watch and his two gold teeth "for evidence", he bade me a good afternoon.  I bade him a dozen cookies.

As I  recall, Dolor lay a long time in the hallway.  For a while I considered  propping him up in a chair so nobody would stumble over him, but a couple of orderlies dragged him away before I  could get around to it.  Just as well – I couldn't find a chair.

The next day I was juggling some books when my new desk arrived.  To make room for it, I put my old one out into the hallway.  I considered  propping it up in a chair so nobody would stumble over it,

but the desk managed to keep people out of my office, so I  kept it around.   However, a reporter did weasel his way in that afternoon.  He smelled of last night’s blue plate special, parts of which were sticking out of his coat pocket.

"What's the low-down on this guy who got croaked?"
"He was an oxnard."
"Well, we can't print that.  Can't you give me anything I can use?  Any slander?  Any hearsay?"
"How about a 'no comment’?"
"Great!  That's just what I need."
He kissed my lampshade and ran off, yelling,"Copy!  Print it!  Put me to bed!” pausing only long enough  to trip over my old desk.  Too bad I couldn't find a chair.

It was all verified in black and white the next morning.

President Salpingo threw the paper down and sat on it.
"This is bad for business," he said.  "People will be running out to buy pens after this, and we don't 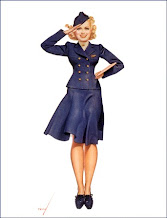 make pens.  Sales are down this quarter as it is.  Did this guy have any children?"
"Only one," I said.  "A brother."
"I'm sorry I have to ask these questions," he said.  "I realize that you weren't very close."
"It's a nasty business."
"We'll be keeping in touch," he said, pushing a button on his  desk.  His secretary came in, loosening her blouse.  Salpingo bit his tongue.
"No!  I buzzed once, not twice!"

I returned to my office, where I found the following note stapled  to my window:

Looked like our office boy wouldn't be bringing me coffee and doughnuts that morning.  I entertained a second opinion when a cobra hugging my legs was sliced by a scimitar lunging from the ceiling.
Black widows knitted knots in the adding machine, and a smoke bomb seared through the window.  I stepped into the hallway to a barrage of Bic pens and old shoes, and folded myself under the old desk.

"What happened then?" asked Salpingo.
"I remembered that to stop a pen, you had to kick it in the ball."
"Good use of the old gray matter," said the president.  "We'll be keeping in touch."
As I left, he buzzed twice for his secretary.

My wife was burning our roast to save it when I got home.

"What's cookin', babe?" I asked, ignoring the smoke.  But it was good smoke.  It smelled fresh.
"You don't love me anymore!" she cried, slamming the bedroom door.  I was glad to see we were on speaking terms again.
I put the roast out for the cats, making a mental note to give the survivor a decent burial in the morning.  Then I went to the bedroom and kicked  the door down.  She was waiting for me near the closet, grasping something in her left hand.
It was a Pic fine-point.
"You!" I sputtered.
"Don't come near me or I'll break this pen!"  She thought about that  for a moment.  "We weren't very close," she added.
"You can't be purulent about this, woman!"  I was getting brave now, inching away from her only half as fast as I had been.  She lunged at  my pants and wrestled me into  the closet.
There, my arm brushed up against something hairy.  It was  a leg.  I felt I knew that leg I felt.
"I told you we'd keep in touch."
"Salpingo!"  I rose in shock.
"Yes, Salpingo!" he said.
"But--why?"
"Because!"

My wife immediately rose to the occasion, flailing about with her  pen.  At one point she came within three inches of hitting Salpingo's left ear – and stabbed him right between the eyes.  He fell to the floor.
"Ong and some milk duds," he said.  Those were his last words. 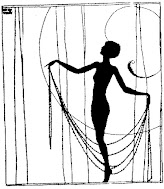 I crawled out of the closet and found my wife in bed, casually smoking the evidence.  Without her clothes, she was still a fetching  sight.
"I did it all for you," she said.  "You won't report  me, will you?"
"Of course not."

The police came for her minutes after I called.  I can still  remember the look on her face when they carried her away.  Too bad I can't remember her face.

I retired from the Lactasia Chemical Rubber Company soon thereafter, having salted away some good embezzlement, and went to Jamaica for an extended vacation with Salpingo's secretary.

You know, funny thing about that girl – she can only count to two. 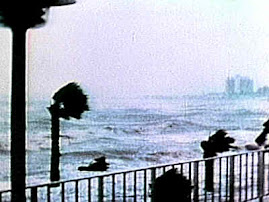 Posted by The Animating Apothecary - Perpetrated by Jim Middleton at 6:28 PM