My Favorite Columbia Recordings These Days... 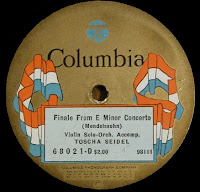 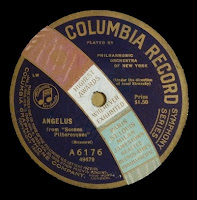 It can be a bit tricky to identify a year, since early 78rpms were cluttered with patent dates and no indication of when things were recorded.  However, Columbia recordings provide certain visual signals to their age.  It appears that in 1917, their studios were working overtime to fill dealer shelves with classical selections.  So if you see a record with the “banner label” on the left, you’re looking at material from 1917 to 1922.  These are acoustic recordings, so that means the fidelity is a bit “soft” (ok, absolutely archaic), but they can serve as a basis for projects - or “background” sounds.
For 1923 to 1925, Columbia used this “flag label” on the right for their recordings.  Again, these are all acoustic, as the company was preparing to switch to its electric systems in 1925 under a new “Viva-Tonal” label.  That material will have to wait for public domain status, but it’s coming quickly....until then, thrill with the notion of Rhapsody in Blue being public domain.

Posted by The Animating Apothecary at 9:17 AM