The Mystery of the Elusive CDs

The other thing I have noticed is the challenge in tracking down copyright pathways or possible bootlegged material, and whether such can still serve a purpose.  What can be the value of public domain material performed in anonymity, sandwiched between material where licenses to perform have apparently never been procured? 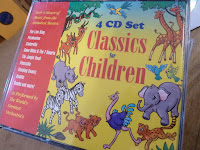 Over 20 years ago, I found a four-CD set entitled Classics for Children, featuring music "As Performed By The World's Greatest Orchestra's" (sic).  The (sic) was my first red flag.  The listing of selections was my second - The Lion King, Pocahontas, Cinderella, Pinocchio, Aladdin were among the cover listings.  The images on the cover were generic, cartoony animals, with no artist identification.

It had no booklet, no "listing of Orchestras, Soloists, and Conductors" as promised on the backside.  But most tellingly, it had no mention anywhere of Disney or any licensing agreement with the Disney company.  My third red flag.

The "suites" on each CD are certainly Disney material - The Lion King Symphonic Suite, Beauty and the Beast Symphonic Suite, all broken into sub-category descriptions of the songs included - The Circle of Life, Whistle While You Work, and so on.

After each "suite" are some standard public domain musical pieces - William Tell Overture, Nutcracker Suite, Swan Lake, In the Hall of the Mountain King.  Nicely performed, but again, no credit to an orchestra, soloist, or conductor.  And there was still that troubling apostrophe "s" on the cover for a plural of orchestra.

The discs themselves were colorfully produced and the sound balanced, but no credit to composers or mention of Disney.

And, so, the exploration began.  Twenty three years had passed since these discs were issued, on the edge of the internet explosion.  What sort of online footprint could be found?

To sum it up, extremely little about any of the parties could be uncovered (as of my initial searches).  The image above is the Google location for an empty building representing the only physical address for any of the sites, and it isn’t in Oregon.

Ultimately, I’m not really interested in getting access to Disney rights to their music - far from it.  If, however, it can be determined that these performances of public domain symphonic pieces has been gleaned from Indian, Chinese, or Korean orchestras (none are named) or from areas that don’t share copyright concerns with the rest of the planet, well, that’s one nice piece from Swan Lake I’d love to use...
Stay tuned!

Posted by The Animating Apothecary at 9:25 AM